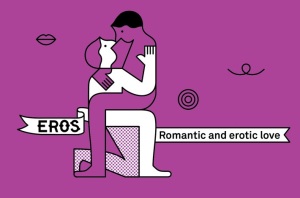 The primary kind of love was eros, named after the Greek god of fertility, and it represented the idea of sexual passion and desire.

Interestingly, the Greeks didn’t always think of it as something positive, as we tend to do today.

In fact, eros was viewed as a dangerous, fiery, and irrational form of love that could take hold of you and possess you.

“Everything in the world is about sex except sex. Sex is about power.”
– Oscar Wilde

Eros involved a loss of control that frightened the Greeks. Which is odd, because losing control is precisely what many people now seek in a relationship. Don’t we all hope to fall “madly” in love?