“What people commonly call fate is mostly their own stupidity.”

“All truth passes through three stages. First, it is ridiculed. Second, it is violently opposed. Third, it is accepted as being self-evident.”

Agape is the love of humanity. It is the kind of love which makes us sorrowful when we hear of a crisis in another nation (or our own); that makes us give our time or money to charity; and makes us feel connected to people we don’t know simply on the basis of our shared experience as human beings. 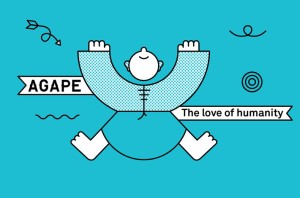 Perhaps the most radical of all, was agape or selfless love. This was a love that you extended to all people, whether family members or distant strangers. Agape was later translated into Latin as caritas, which is the origin of our word “charity.”

“Compassion is the basis of morality.” – Arthur Schopenhauer

C.S. Lewis referred to it as “gift love,” the highest form of love. But it also appears in religious traditions, such as the idea of mettā or “universal loving kindness” in Theravāda Buddhism. Currently, there is growing evidence that agape is in a dangerous decline in many countries.

The question of why human beings are sometimes prepared to risk their own lives to save others has puzzled philosophers and scientists for centuries.

From an evolutionary point of view, altruism doesn’t seem to make any sense. According to the modern Neo-Darwinian view, human beings are basically selfish. After all, we are only really ‘carriers’ of thousands of genes, whose only aim is to survive and replicate themselves. We shouldn’t be interested in sacrificing ourselves for others, or even in helping others.

It’s true that, in genetic terms, it’s not necessarily self-defeating for us to help people close to us, our relatives or distant cousins—they carry many of the same genes as us, and so helping them may help our genes to survive. But what about when we help people who have no relation to us, or even animals?

No Such Thing: According to some psychologists, there is no such thing as ‘pure’ altruism. When we help strangers (or animals), there must always be some benefit to us, even if we’re not aware of it. Altruism makes us feel good about ourselves, it makes other people respect us more, or it might (so far as we believe) increase our chances of getting into heaven.

You Scratch My Back, I Scratch Yours: Or perhaps altruism is an investment strategy – we do good deeds to others in the hope that they will return the favour some day, when we are in need (known as reciprocal altruism).

Keeping Up Appearances: According to evolutionary psychologists, it could even be a way of demonstrating our resources, showing how wealthy or able we are, so that we become more attractive to the opposite sex, and have enhanced reproductive possibilities.

My Mistake: Finally, evolutionary psychologists have also suggested that altruism towards strangers may be a kind of mistake, a ‘leftover’ trait from when human beings lived in small groups with people we were genetically closely related to. Of course, we felt an instinct to help other members of our group, because our own survival depended on the safety of the group as a whole, and because, more indirectly, this would support the survival of our genes. We don’t live in small tribes of extended family any more, but we habitually behave as if we are, helping the people around us as if we are related to them.

What all these explanations have in common is that they are really attempts to explain away altruism. They’re attempts to make excuses for altruism: ‘Please excuse my kindness, but I was really just trying to look good in the eyes of other people.’ ‘Sorry for helping you, but it’s a trait I picked up from my ancestors thousands of years ago, and I just can’t seem to get rid of it.’

Many acts of kindness may be primarily —or just partly—motivated by self-interest. But is it naive to suggest that ‘pure’ altruism can exist as well? An act of ‘pure’ altruism may make you feel better about yourself afterwards, and it may increase other people’s respect for you, or increase your chances of being helped in return at a later point. But it’s possible that, at the very moment when the act takes place, your only motivation is an impulsive unselfish desire to alleviate suffering?

“Yesterday, I was about to have a shower, and saw a spider near the plug hole of our bath. I got out of the shower, found a piece of paper, gently encouraged the spider on to it, and scooped it out of danger. Why did I do this? Perhaps in the hope that a spider would do the same for me in the future? Or that the spider would tell his friends what a great person I am? Or, more seriously, perhaps it was the result of moral conditioning, a respect for living things and an impulse to ‘do good’ which was ingrained in me by my parents? (Although come to think of it, my parents didn’t teach me those things…)

No, I think this simple act was motivated by empathy. I empathized with the spider as another conscious creature, another living being, who was entitled to stay alive just as I was. And I believe that empathy is the root of all pure altruism.” – Dr. Steve Taylor, senior lecturer in psychology at Leeds Metropolitan University, United Kingdom

Sometimes empathy is described as a cognitive ability to see the world through another person’s eyes, but I think it’s actually much more than that. In my view, the capacity for empathy shows that, in essence, all human beings – and in fact all living beings – are interconnected. At some deep level, all living beings are expressions of the same consciousness, after all, we have no ethical obligations towards rocks.

“What I’m asking you to entertain is that there is nothing we need to believe on insufficient evidence in order to have deeply ethical and spiritual lives.” – Dr. Sam Harris

In the words of the 19th century German philosopher Schopenhauer, ‘My own true inner being actually exists in every living creature, as truly and immediately known as my own consciousness in myself…This is the ground of compassion upon which all true, that is to say unselfish, virtue rests, and whose expression is in every good deed.’

In other words, there is no need to make excuses for altruism. Instead, we should celebrate it as a transcendence of seeming separateness. Rather than being unnatural, altruism is an expression of our most fundamental nature—that of connectedness.

What did the world’s foremost western philosophers think about art?

What matters is a higher, perfect beauty; a harmony which we do not immediately appear to see. If you want to see a copy of reality, you might as well buy a mirror. We should strive to look for something of a higher nature instead of repeating the things we see.

Works of art are an organic unity. The work is whole. It is, beginning, middle and ending, in itself complete. Works of art are artistic; that is to say, they express a perceivable harmony. Its elements are organised, and none of its parts can be replaced or removed without it losing its value.

It is important that art conveys a sense of order and harmony. Everything seems to be finely tuned. The internal coherence of the work of art is immensely close nit and complex, as if it was designed to serve a certain purpose. Like the parts of an organism are dependent upon the organism’s will to further exist. The work of art, however, possesses this strong coherence without any purpose whatsoever.

When the work of art has been created, we can see that it is good, but we could not have thought of any parameters or rules of design beforehand. The relations within the composition are only purposeful within itself and create a formal unity of universal beauty in which everything is carefully coordinated.

Art is an absolute necessity. We learn about ourselves by means of the work of art. The artist is irrelevant; however, we can learn from the image which he provides. In doing so, that is, by expressing ourselves through a certain material, we learn more about ourselves. Consequently, the world becomes less and less peculiar.

The work of art is a harmonious and selfless entity, and is heavily contrasted with the reality of human life. Happiness is unthinkable. The work of art is an escape from the chaos of everyday life. The acceptance of this is an ideal and the form it takes is art. In aesthetic bliss we can experience how joyful life should be; because when we behold and enjoy beauty, our soul is calmed and comforted. The work of art releases us from the world in which we live – art stops the wheels of time, she always achieves her purpose.

Art reconciles us with life; however, this reconciliation is not perfect. When one gazes at art, one does not gaze at reality. We are allowed to have a haven, but we are not allowed to shy away from living. When one purposefully elevates one’s life, life becomes a work of art. And when life is beautiful, ethics and aesthetics become one. The work of art pleases us in a moment of elation – it makes life seem shorter.

Art is for art’s sake, that is, art justifies itself and has the quality of dispensing with a purpose – moral or rational – since only through the aesthetic production can the world be justified.

Art may well be said to be the bridge between Man and the superhuman, the übermensch, the bridge to perfection and eternity. Through art, Man transcends the confines of his own ego and secures oneness with the universe. Clearly, it is established: the role of art as means of self-transcendence.

Art is intransitive. Aesthetics cannot be enunciated in a clear linguistic form. The work of art does not tell us anything and requires no further explanation; however, it shows the unsayable, and provides the right perspective.

Heidegger (1889-1976) The disclosure of the concealedness

Art has its place within the idea of the world and reality. Art concerns itself with truth and we should look for what it can show us. This disclosure in the face of concealedness is not a state but an event, it is something that happens. Disclosure also means that focus shifts. And since reality is not a total presence, reality is always more, the work of art shows us concealedness as concealedness.

“How does a body, a nonmental object, come to ‘embody’ or ‘express,’ for our aesthetic imagination, values which it does not literally contain? Why should colours and shapes and patterns, sounds and harmonies and rhythms, come to mean so very much more that they are?”