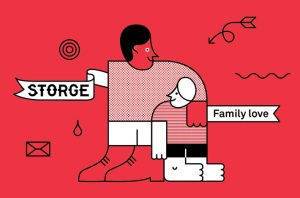 According to the Greeks, storge is the almost unconditional love that certain people feel for others.

This love could have its base in the genetic relation of parents and offspring, or nephew and niece, and everything in between.

Storgic lovers place much importance on commitment. Living together, or maybe even children, are seen as legitimate long term aims for their bond.

“All happy families are alike; each unhappy family is unhappy in its own way.” – Leo Tolstoy, Anna Karenina

However, more modern interpretations of storge also include the love between those who are committed and have a long, meaningful relationship together in which, over time, the physical element has ceased to be a factor – the love of the significant other.

According to the Handbook of Relational Diagnosis and Dysfunctional Family Patterns by Florence W. Kaslow, the near universal characteristics of a dysfunctional family are the following:

“All happy families are alike; each unhappy family is unhappy in its own way.”
– Leo Tolstoy, Anna Karenina

“After a good dinner one can forgive anybody, even one’s own relations.”
– Oscar Wilde, A Woman of No Importance

Tolstoy said Anna Karenina was the first novel he ever published, even though he wrote War and Peace first.

The most expensive coffee is coffee in which the berries go through the digestive tract of the Kopi Luwak, a small cat-sized Indonesian animal.  The “beans” are then harvested from the animal’s waste, cleaned, roasted, and sold.  This coffee costs $100 to $600 per pound.

In Latin, the numeral “one” has 15 plural forms.

Even though North Korea is ruled by a totalitarian leader who is both chairman of the Worker’s Party and leader of the armed forces, Kim Il-sung (1912-1994) is designated in the North Korean constitution as the country’s Eternal President. The author and journalist Christopher Hitchens therefore dubbed the country a necrocracy.

‘Alexey Alexandrovitch had gained a brilliant victory at the sitting of the Commission of the 17th of August, but in the sequel this victory cut the ground from under his feet. The new commission for the inquiry into the condition of the native tribes in all its branches had been formed and despatched to its destination with an unusual speed and energy inspired by Alexey Alexandrovitch. Within three months a report was presented. The condition of the native tribes was investigated in its political, administrative, economic, ethnographic, material, and religious aspects. To all these questions there were answers admirably stated, and answers admitting no shade of doubt, since they were not a product of human thought, always liable to error, but were all the product of official activity. The answers were all based on official data furnished by governors and heads of churches, and founded on the reports of district magistrates and ecclesiastical superintendents, founded in their turn on the reports of parochial overseers and parish priests; and so all of these answers were unhesitating and certain. All such questions as, for instance, of the cause of failure of crops, of the adherence of certain tribes to their ancient beliefs, etc.—questions which, but for the convenient intervention of the official machine, are not, and cannot be solved for ages—received full, unhesitating solution. And this solution was in favor of Alexey Alexandrovitch’s contention. But Stremov, who had felt stung to the quick at the last sitting, had, on the reception of the commission’s report, resorted to tactics which Alexey Alexandrovitch had not anticipated. Stremov, carrying with him several members, went over to Alexey Alexandrovitch’s side, and not contenting himself with warmly defending the measure proposed by Karenin, proposed other more extreme measures in the same direction. These measures, still further exaggerated in opposition to what was Alexey Alexandrovitch’s fundamental idea, were passed by the commission, and then the aim of Stremov’s tactics became apparent. Carried to an extreme, the measures seemed at once to be so absurd that the highest authorities, and public opinion, and intellectual ladies, and the newspapers, all at the same time fell foul of them, expressing their indignation both with the measures and their nominal father, Alexey Alexandrovitch. Stremov drew back, affecting to have blindly followed Karenin, and to be astounded and distressed at what had been done. This meant the defeat of Alexey Alexandrovitch. But in spite of failing health, in spite of his domestic griefs, he did not give in. There was a split in the commission. Some members, with Stremov at their head, justified their mistake on the ground that they had put faith in the commission of revision, instituted by Alexey Alexandrovitch, and maintained that the report of the commission was rubbish, and simply so much waste paper. Alexey Alexandrovitch, with a following of those who saw the danger of so revolutionary an attitude to official documents, persisted in upholding the statements obtained by the revising commission. In consequence of this, in the higher spheres, and even in society, all was chaos, and although everyone was interested, no one could tell whether the native tribes really were becoming impoverished and ruined, or whether they were in a flourishing condition. The position of Alexey Alexandrovitch, owing to this, and partly owing to the contempt lavished on him for his wife’s infidelity, became very precarious.’