The purchasing of objects as a form of mental relaxation.

English is a complex language. Meanings of words are constantly changing and new definitions arise all the time. See if you can spot some new meanings in the alphabetic list below.

Divine [Verb.]
To sober up.

Geography [Verb.]
To write in sand.

Transitive verb [Noun.]
Verb that has undergone a sex change.

See other: English Is A Complex Language

Whoever came up with five-second rule had probably just dropped an entire cookie on the ground and needed a sanitary excuse to save it. However, according to research from Clemson University, such a cookie could have picked up toxic salmonella bacteria during that brief time window, especially on a tiled or wooden surface.

“If more of us valued food and cheer and song above hoarded gold, it would be a merrier world.” – J.R.R. Tolkien

Having said that, different foods produce a smorgasbord of results. Comparing the bacteria colonies picked up by dry saltines and wet pastrami after the sodium-rich snacks hung out on a contaminated floor for a few seconds, moist sausage tends to pick up far more flora.

Even food that has spent a mere two seconds on a contaminated surface can be considered suspect. The “five-second rule” seems to be a juvenile fiction. In fact, even if something spends a mere millisecond on the floor, it attracts bacteria. How dirty it gets depends on the food’s moisture, surface geometry and floor condition – not time.

Sad news for clumsy eaters and students everywhere: the “five-second rule” is a myth.

“You could also ask who’s in charge. Lots of people think, well, we’re humans; we’re the most intelligent and accomplished species; we’re in charge. Bacteria may have a different outlook: more bacteria live and work in one linear centimeter of your lower colon than all the humans who have ever lived. That’s what’s going on in your digestive tract right now. Are we in charge, or are we simply hosts for bacteria? It all depends on your outlook.” – Neil deGrasse Tyson, Space Chronicles: Facing the Ultimate Frontier

In order to keep track of what a kilogram is, there exists a unit of metal which serves as the official world benchmark. This special piece of metal is known as the International Prototype Kilogram.

A replica of the IPK, kept under three glass bells.

The International Prototype Kilogram, or IPK, is a right-circular cylinder made of 90% platinum and 10% iridium. Both its height and diameter are only 39.17 mm, due to the extremely high density of platinum (almost twice as dense as lead and more than 21 times as dense as water). Iridium was added to improve the IPK’s hardness while still retaining the beneficial properties of the platinum, being extreme resistance to oxidation, average thermal and electrical conductivities, and low magnetic susceptibility.

The IPK as well as six sister copies are located in Sèvres near Paris, France. Outside of France, 42 countries have one or more national prototypes of their own.

“You wanna fly, you got to give up the shit that weighs you down.”
– Toni Morrison, Song of Solomon

Like almost all seven base units in the International System of Units, the kilogram is a completely arbitrary value. It is not based on any existing natural value – at one point in history, it was simply decided that what we now know as a kilogram, would be a kilogram from then on. The second, however, equals one sixtieth of one sixtieth on one twenty-fourth of the time it takes for the Earth to rotate around the Sun, and is thus based on a physical, natural value, albeit not a universal one.

The metre was similarly once based on an actual object, the International Prototype Metre. In 1960 it was decided that the definition of a metre would be changed to ‘the length of the path travelled by light in a vacuum during a time interval of 1⁄299,792,458 of a second.’ Consequently, the kilogram is the only remaining value in need of an international prototype. 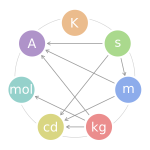 The IPK plays an important role in determining the values of many units, both clearly weight-related units as well as seemingly unrelated units like the lumen (luminous flux). One newton is defined as the force necessary to accelerate one kilogram at one metre per second squared. The joule is defined as that which is expended when a force of one newton acts through one metre. The watt equals one joule per second. The candela, the unit for luminous intensity, is defined as the magnitude of an electromagnetic field, in a specified direction, that has a power level of 1/683 watt per steradian at a frequency of 540 terahertz. And finally, lumen is defined as emission of candela per solid angle of one steradian (squared radian).

The long-term solution to the increasing weight of the IPK and subsequent devaluation of other units is to liberate the SI system’s dependency on the IPK by developing a practical realization of the kilogram that can be reproduced in different laboratories by following a written specification. The units of measure in such a practical realization would have their magnitudes precisely defined and expressed in terms of fundamental physical constants.

“Weight doesn’t matter. It really doesn’t. I mean, it does if you’re a model or whatever.”
– Meg Cabot, Queen of Babble

Rogue, freak, or killer waves have been part of marine folklore for centuries, but have only been accepted as a real phenomenon by scientists over the past few decades.

They are relatively large and spontaneous ocean surface waves that occur far out at sea, and are a threat even to large ships and ocean liners over 250 meters long.

Rogues, called extreme storm waves by scientists, are those waves which are greater than twice the size of surrounding waves; they are very unpredictable, and often come unexpectedly from directions other than prevailing wind and waves.

Most reports of extreme storm waves say they look like walls of water. They are often steep-sided with unusually deep troughs.

Since these waves are uncommon, measurements of this phenomenon are extremely rare, making it a very hard natural occurrence to analyse. It is only since 1995 that the by then almost mythical freak wave was substantiated by something more than anecdotal evidence.

The Draupner wave or New Year’s wave is often believed to be the first freak wave to be detected by a measuring instrument, occurring at the Draupner platform in the North Sea off the coast of Norway on 1 January 1995.

Minor damage was inflicted on the platform during this event, confirming the validity of the reading made by a downwards-pointing laser sensor. In an area with significant wave height of approximately 12 metres (39 ft), a freak wave with a maximum wave height of 25.6 metres (84 ft) occurred with a peak elevation of 18.5 metres (61 ft). The freak waves are real, and as yet (conclusively speaking) unexplained by science.

Through the centuries that man has roamed the seas, freak waves have probably been responsible for countless of deaths, and tragically continue to do so, even in modern times. “Seems Neptune has claimed another soul.” (Firth of Fifth – Genesis, 1973).

The European Space Agency stated in 2004 that “Severe weather has sunk more than 200 supertankers and container ships exceeding 200 metres in length during the last two decades. Rogue waves are believed to be the major cause in many such cases”.

“I felt once more how simple and frugal a thing is happiness: a glass of wine, a roast chestnut, a wretched little brazier, the sound of the sea. Nothing else.”
– Nikos Kazantzakis, Zorba the Greek

A community in Thule, in north-western Greenland, was so remote that until the start of the 19th century they believed themselves to be the only people in the world.

The potato originated in Peru about 3 million years ago; the Peruvians consider the spud a point of national pride.

Backpfeifengesicht is German for ‘a face that makes you want to hit it’.

Aristotle believed that the Sun went round the Earth, that intelligence was located in the heart, and that the brain was a device for cooling the blood. He also taught that flies had four legs.

Costa Rica is a country in Central America, bordered by Nicaragua to the north, and Panama to the south-east; it is located between the Pacific Ocean to the west, and the Caribbean Sea to the east. Its name means ‘rich coast’ in Spanish.

It is not a country that will be well known to most, but observed more closely, it is a nation which has some quite interesting characteristics: